June 19, 2018 – Vancouver, BC: Riverside Resources Inc. ("Riverside" or the "Company") (TSX-V: RRI), is pleased to announce results from exploration work on its 100%-owned La Silla Gold Project (the “Project”) located 75 km northeast of Mazatlan in Sinaloa, Mexico. Riverside geologists collected 52 chip, channel and grab samples over the past month during a focused exploration program with assay results ranging from <0.05 up to 19.9 g/t gold and from <0.05 up to 200 g/t silver. Five of the samples returned greater than 1 g/t gold (see Table 1 below for highlighted samples). The new sampling program appears to have extended the strike length of known veins, while also identifying new vein structures at the La Silla Project (see Figures 1 & 2).

Riverside acquired the La Silla Project through the Mexico Government lottery process (see press release November 17, 2015) by consolidating two large mining concessions covering an area of 2,305 hectares (~23km2). Riverside’s initial exploration program of mapping and rock-chip sampling obtained assay results ranging from <0.05 up to 7.24 g/t gold and <0.05 up to 148.4 g/t silver (see press release June 29, 2016). The current exploration program completed by Riverside expands on the previous work done at the Project, as Riverside refines targets in preparation for potential drilling in the near future.

Riverside’s President and CEO, John-Mark Staude, stated: “We are pleased with the recent sampling results at La Silla and are developing a stronger understanding of the gold and silver mineralization and their controls. The Ciruelo and El Roble veins show extensive strike and we are working to define high quality drill targets. Riverside is in discussions with prospective partners and will continue further exploration work as the Company evaluates its options for forwarding the project.”

The recent work focused on extending known areas of mineralization and further exploring the concessions for new showings, abandoned workings and potential structures that might host additional gold mineralization. The Ciruelo Vein is located within the northern concessions and consists of an east-west striking vein located along the contact between andesitic volcanics and overlying porphyritic dacites similar to the El Gallo District to the north operating with McEwen Mining in Sinaloa. The structure/vein is typically 1 to 3 m wide and has been sampled over a distance of 1.5 km, which is open along strike to the east. Numerous shallow, old workings are found on this structure where local gambosinos (illegal miners) have accessed and processed small amounts of high-grade gold mineralization. The vein shows a pinch-and-swell form with larger 30 m breccia blowout areas similar to major Sierra Madre Occidental vein. The alteration envelope is typically from several to tens of meters in width comprising predominantly silicification with some argillic alteration. The best precious metal values are associated with green quartz veins, which have become a priority target where sample values have reached up to half an ounce gold. 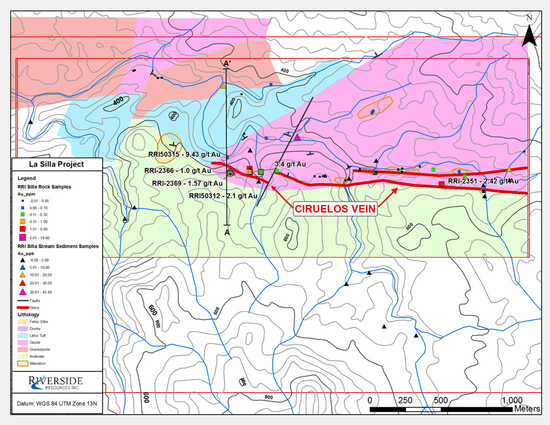 Figure 1: Map of the Ciruelos Vein 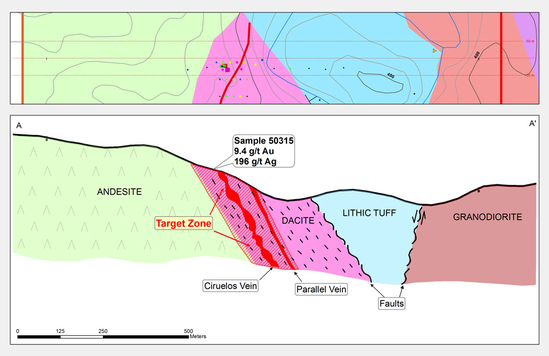 The El Roble Vein located on the southern portion of the Project was also explored and consists of north-northwest trending veins within andesitic volcanics similar to various significant mining districts in the area including San Dimas, Tayoltita and El Concheno mines. Prospecting and sampling the area of the El Roble Vein identified two complementary and possibly cross-cutting veins south of the historic drilling. The El Roble Vein was drilled in 2003 by Meridian Gold* where historical drill intercepts included (DDH001) 15 metres of 6.9 g/t gold and 33 g/t silver, as well as (DDH003) 1.5 metres of 5.33 g/t gold and 26 g/t silver. One of the two new target areas, the El Roble 2 Vein, strikes north-northeast and appears to intersect the El Roble Vein in the areas of the past drilling. The El Roble 2 Vein is 0.5 to 4 m wide and was sampled four times over a 500 m strike length with one sample returning 1.8 g/t gold. The veining at this location comprises several smaller 30 cm wide parallel quartz stringer veins showing argillic alteration, silicification and green quartz with orange-brown carbonate. A second target area was found near the geological boundary between andesites and overlying dacites. This area is noted to be on strike with the east-west striking veins of the adjacent Sinaloa Mine property to the immediate east. Riverside’s most recent work returned one grab sample of 19.9 g/t gold and 200 g/t silver in addition to anomalous copper, lead and zinc. The sample is believed to show that the veins from the Sinaloa Mine extend onto the property providing a new exploration opportunity for the El Roble area.

*Disclosure Note: The above-described exploration work programs and the analytical results that were reported by Meridian Gold on the La Silla Project are considered to be historical. The reliability of the historical data is uncertain but is considered to be relevant by Company management. It is the Company’s intention to verify, wherever reasonably possible, the most significant historical data; however, there is a risk that the Company’s confirmation work or future drill testing may produce results that substantially differ from the historical results.

Disclosure: Samples RRI50312 & 50315 are from sampling conducted in late 2017 and not previously reported.
All samples are chip or channel samples except for *RRI2399, which was a grab-sample.

Qualified Person and QA/QC:
The scientific and technical data contained in this news release pertaining to the La Silla Project was reviewed and/or prepared under the supervision of Freeman Smith, P.Geo., an independent qualified person to Riverside Resources Inc. who is responsible for ensuring that the geologic information provided in this news release is accurate and who acts as a “qualified person” under National Instrument 43-101 Standards of Disclosure for Mineral Projects.

Rock samples collected were taken to the Bureau Veritas Laboratories in Hermosillo, Mexico for fire assaying for gold. The rejects remained with Bureau Veritas in Mexico while the pulps were transported to Bureau Veritas’ laboratory in Vancouver, BC, Canada for 45 element ICP/ES-MS analysis. A QA/QC program was implemented as part of the sampling procedures for the exploration program. Standard samples were randomly inserted into the sample stream prior to being sent to the laboratory.

About Riverside Resources Inc.:
Riverside is a well-funded exploration company that is driven by value generation and discovery. The company more than $2,500,000 in cash, less than 45M shares issued and a strong portfolio of gold-silver and copper assets in North America. Riverside has extensive experience and knowledge operating in Mexico and leverages its large database to generate a portfolio of prospective mineral properties. In addition to Riverside’s own exploration spending, the Company also strives to diversify risk by securing joint-venture partnerships and spin-out entities to advance multiple assets simultaneously and create more chances for discovery. Riverside has additional properties available for option, with more information available on the Company’s website at www.rivres.com.