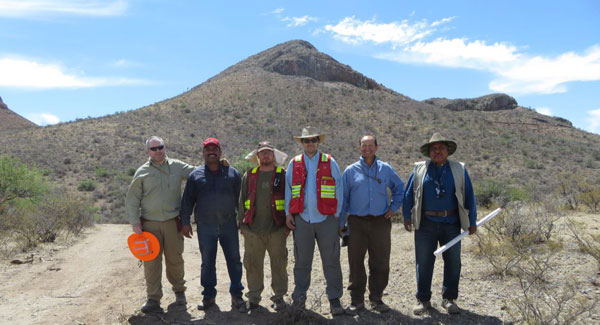 Photo of Riverside and Sierra Madre Geologists on site at the Penoles Project in Durango, Mexico


Trenching on the Jesus Maria zone discovered that there is a much wider zone of mineralization than previously recognized, and revealed that there are two vein types. The first vein type is the previously known main silver-gold-zinc-lead, silica-rich Jesus Maria vein. The second, newly recognized, vein type lies structurally above the Jesus Maria vein exhibiting significant silver values with abundant carbonate in a wide vein zone. This increases the potential for a bulk mineable open pit mine, and provided new drill targets. Drilling intercepted this wider semi-parallel sequence of upper silver-carbonate veining as well as the main quartz-rich Ag-Zu-Pb-Zn Jesus Maria vein zone. Underground exploration and sampling of the old workings also found silver bearing carbonate veins, which prior to this recent work was not known to Riverside and demonstrates larger potential for the Jesus Maria vein system than previously recognized.

Riverside’s President and CEO, John-Mark Staude stated, “Riverside is very pleased with the discovery of a wider vein system at Jesus Maria and looks forward to much more extensive drilling down dip and along the additional kilometer strike length. Every drill hole thus far has successfully hit silver-gold mineralization. With several other exposed vein targets with old workings, but no modern drill definition, we feel positive about the exploration potential of the system. The next round of drilling could include further holes at Jesus Maria, as well as drilling the semi-parallel vein system at San Rafael. In addition to all of the vein targets, Riverside and its partner have drilled at roughly 100-m spacing to prove up a consistent gold body at the still open gold zone at El Capitan. Overall the Peñoles District continues to be a high-quality exploration project progressing with multiple gold and silver bodies and is one of Riverside’s core assets.”

The new trenching program undertaken in March and April 2013, consisted of four trenches, which have extended the Jesus Maria mineralized zone approximately 100 metres to the east of the previously reported Trench SMG No.1. The easternmost trench, SMG No.11, returned 15.4 metres averaging 0.15 g/t gold, 420.8 g/t silver, 0.42% lead, and 0.29% zinc, and included a 2.2-meter interval that returned 2,152.2 g/t silver. Significant trench results from the recently completed program are listed in the table below. The results indicate that there is much more potential for further exploration along the Jesus Maria vein system, which remains open to the west and at depth.

2013 Drill Program Details:
The objective of the recent drill program was to systematically test the down-dip extent of the Jesus Maria mineralized zone below the trench results immediately around the historic mine workings. A total of eight drill holes were completed at inclinations between -45 and -90 degrees at  approximately  50-meter  intervals  over  a  strike  length  of  330  metres. The  drill  holes encountered  multiple  mineralized  zones,  including  the  previously  unrecognized  high-grade silver-carbonate vein zone identified by the trenching program. 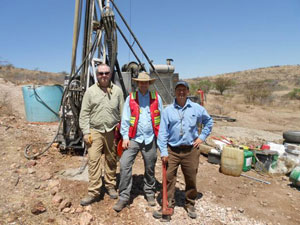 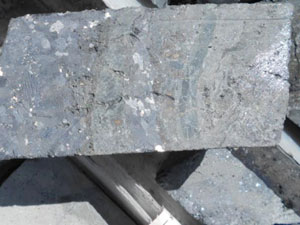 True widths of the mineralized zones have not yet been determined. Reported core lengths of mineralization  represent  approximately  70  to  95%  of  the  true  widths  depending  on  the inclination of each hole. A map showing the location of each of the 2013 trenches and drill holes will be available on the company’s website, www.rivres.com.

About the Peñoles Project:
The Peñoles Project is a significant historic silver mining district in the Durango Silver Belt that has had relatively little modern exploration. Published historical accounts indicate that Compania Minera Industrias Peñoles operated several vein-type, underground silver mines at Peñoles from 1887 to 1908, however production records are limited and potential extensions of the mines have never been properly tested. The only other landholder in the Peñoles District is Minera La Parrena, a wholly owned subsidiary of the original mining company, Minera Industrias Peñoles.

Riverside’s Peñoles Project is currently under option to Sierra Madre Developments Inc. Sierra Madre can earn an initial 51% (and up to 65%) interest in the Project by completing further exploration work expenditures and cash and share payments as outlined in a press release dated March 4, 2013.

Qualified Person and QA/QC:
The scientific and technical data contained in this news release pertaining to the Peñoles Project was  reviewed  by Riverside’s  Chief  Geologist,  David  S.  Smith,  MS,  MBA,  CPG,  a  non- independent qualified person to Riverside Resources who is responsible for ensuring that the geologic information provided in this news release is accurate and acts as a “qualified person” under National Instrument 43-101 Standards of Disclosure for Mineral Projects.

According to Sierra Madre, all trench and drill samples were sealed in numbered plastic bags and transported to Inspectorate Assay labs facility in Durango City, a laboratory certified for the provision of assays and geochemical analysis (ISO:9001-2008). All drill cores were placed in numbered boxes and transported to Sierra Madre’s secure core facilities by the drill contractor. Following detailed core logging all core was split using a diamond bladed core saw under the direct supervision of Sierra Madre’s Geologic staff with half of the core kept on site in the original core boxes. Samples were transported to Inspectorate’s facilities in Durango, Mexico for prep work and analyzed at their facilities in Reno, Nevada. All samples were prepared using standard industry prep methods followed by fire assay analysis and aqua regia digest for trace elements. All samples with greater than 10 g/t Au or 100 g/t silver were additionally tested by fire assay with a gravimetric finish. Sierra Madre has included appropriate industry certified standards and blanks within the drill core sample stream, in addition to standards and duplicates as part of the Inspectorate QA/QC program.

About Riverside Resources Inc.:
Riverside is a well-funded prospect generation team of focused, proactive gold discoverers with the  breadth  of  knowledge  to  dig  much  deeper.  The  Company  currently  has  approximately $6,000,000 in the treasury and 37,000,000 shares outstanding. The Company’s model of growth through partnerships and exploration looks to use the prospect generation business approach to own resources, while partners share in de-risking projects on route to discovery. Riverside has additional properties available for option with more information available on the Company’s website at www.rivres.com.