March 21, 2017 – Vancouver, BC: Riverside Resources Inc. (“Riverside” or the “Company”) (TSX-V: RRI), is pleased to report on the progress of partner-funded exploration being conducted with Centerra Gold Inc. (“Centerra”) at the Glor Gold Project (the “Project”), located approximately 8 km west of Alamos Gold’s El Chanate Mine in Sonora, Mexico. The 2017 exploration campaign commenced at the end of January with a program of mechanical trenching that is still ongoing. Thirteen trenches with a combined length of 2,026.2 metres have now been excavated by a heavy-duty excavator. This work was completed in the north-eastern portion of the Project and focused on the Pitaya and Alamo-La Joya targets. The trenching work builds on the 2016 soil geochemistry survey and rock-chip sampling of bedrock outcrops, which identified a number of gold anomalies (see Riverside press release dated February 15, 2016).

A total of 495 trench samples have been collected from the current trenching program. Highly encouraging gold assay results have been obtained from trenches Tr-01, Tr-02, Tr-03 and Tr-09 in the Pitaya target area, with strong indications of disseminated gold mineralization. Highlights of the first trenching results for 2017 are summarized in the table below:

*Assay intervals are composed of continuous 3 metre long sample intervals, with individual samples consisting of hammer-chipped rock fragments being systematically collected horizontally and vertically from one of the walls of the trench for the entire length of the sample interval (3 metre panels).

A first-phase drilling program of approximately 2,000 metres is currently being planned. The first drill-holes will test the newly discovered Pitaya gold zone as well as induced polarization geophysical anomalies that are broadly coincident with this zone.

“We are very encouraged by the initial trenching results completed to-date at the Glor Gold Project. The nature of the gold mineralization and associated alteration at the newly discovered Pitaya gold zone is consistent with the orogenic gold model we have been using to explore the Project. We are pleased to be working with a partner of Centerra’s caliber and look forward to completing our first drill campaign at Glor in the near future.”

Additional Program and Project Details:
Individual trenches are between 100 and 300 metres in length and are typically excavated to depths of 1.5 metres into the bedrock. Trench sampling was done using a 3 metre long sample interval, with individual samples consisting of hammer-chipped rock fragments being systematically collected horizontally and vertically from one of the walls of the trench for the entire length of the sample interval (3 metre panels). To date, 495 trench samples have been sent for analysis since the start of the 2017 program. Gold assays have been received for 446 of these samples which include all the samples collected from the first ten trenches excavated (Tr-01 through Tr-10). Assays are pending for the remaining 49 samples.

The most significant results obtained to date by the 2017 trenching program have come from trenches Tr-01, Tr-02, Tr-03 and Tr-09 in the western part of Pitaya target area (refer to Figure 1 at the bottom of this press release). These trenches have exposed the contact between an iron-rich volcanic rock (andesite) and an underlying sequence of foliated and folded clastic sedimentary rocks, mainly conglomerates and fine-grained sandstone. These lithologies are interpreted to be of Jurassic age and were deformed by Laramide collisional tectonism. Gold mineralization appears to have been localized along this lithological contact, occurring mainly in altered andesite but also in the underlying sedimentary rocks. Gold-bearing rocks display pervasive sericite-iron carbonate hydrothermal alteration along with thin quartz veins and veinlets. Disseminated, partially oxidized pyrite (Fe sulphide) is locally present in the altered rocks.

The mechanical trenching completed at Glor has quickly proven to be a cost-effective method of identifying and delineating zones of gold mineralization in areas where gold-in-soil anomalies have been outlined but where bedrock exposures are sparse or thinly covered by colluvium. The plan is to continue the trenching program for another 4 to 6 weeks, with the goal to increase the extent of the Pitaya gold zone and to test a number of other Au-As soil anomalies in the eastern and central sectors of the property (see Figure 1 below). 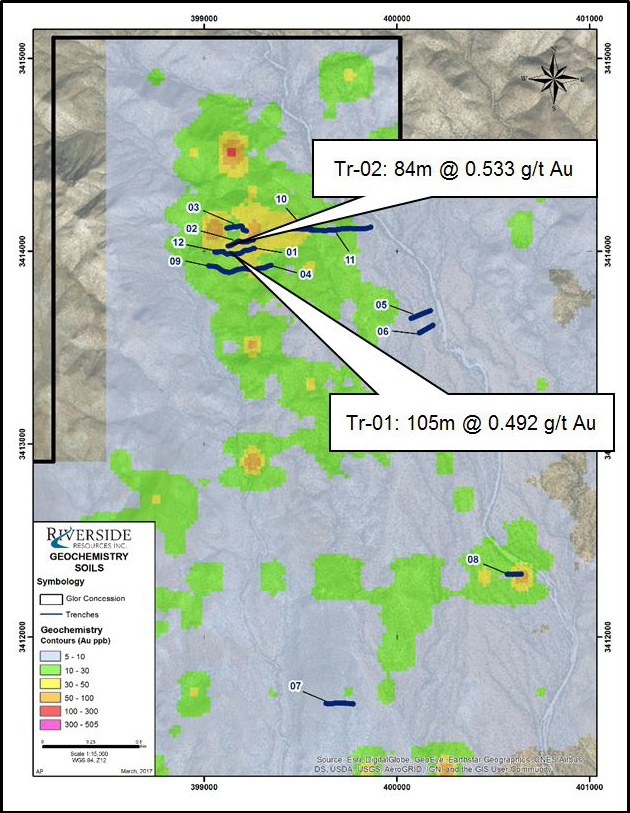 Qualified Person and QA/QC:
The scientific and technical data contained in this news release pertaining to the Glor Project was reviewed and prepared under the supervision of Locke Goldsmith, P. Eng., P. Geo., a non-independent qualified person to Riverside Resources who is responsible for ensuring that the geologic information provided in this news release is accurate and acts as a “qualified person” under National Instrument 43-101 Standards of Disclosure for Mineral Projects.

Rock samples collected from outcrops and trenches are being taken to the Bureau Veritas Laboratories in Hermosillo, Mexico for fire assaying for gold and ICP-MS analysis for 45 common and trace elements. The ICP-MS analyses of 200 gram pulp samples which are prepared from and are representative of the field samples are done at the Vancouver laboratory of Bureau Veritas. A QA/QC program has been implemented as part of the rock sampling program at Glor, with 44 blank and standard samples being included with the 446 trench rock samples which are being reported on in this press release.

About Riverside Resources Inc.:
Riverside is a well-funded project generation team of focused, proactive gold discoverers. The Company currently has approximately $6,500,000 in the treasury and approximately 44,000,000 shares outstanding. Riverside has a strong and growing portfolio of gold-silver and copper projects in Mexico. The Company structures partnerships on many of its projects to reduce risk and generate multiple discovery chances across the Company’s portfolio. Riverside has additional properties available for option with more information available on the Company’s website at www.rivres.com.

Certain statements in this press release may be considered forward-looking information. These statements can be identified by the use of forward-looking terminology (e.g., "expect”,” estimates", "intends", "anticipates", "believes", "plans"). Such information involves known and unknown risks -- including the availability of funds, the results of financing and exploration activities, the interpretation of exploration results and other geological data, or unanticipated costs and expenses and other risks identified by Riverside in its public securities filings that may cause actual events to differ materially from current expectations. Readers are cautioned not to place undue reliance on these forward-looking statements, which speak only as of the date of this press release.