May 9, 2017 – Vancouver, BC: Riverside Resources Inc. (“Riverside” or the “Company”) (TSX-V: RRI), is pleased to announce that the Company has commenced a self-funded exploration program at the Cecilia Gold Project (the “Project”)located in northeastern Sonora, Mexico. Riverside’s exploration team is targeting epithermal gold-silver mineralization within a felsic volcanic flow-dome setting. Multiple targets exist at different elevation levels within the complex, with historic results indicating the presence of near surface gold mineralization.

Riverside’s first phase exploration program at the Cecilia Project will consist of extensive rock-chip sampling to confirm the existence of zones of gold-bearing hydrothermal breccias and quartz veinlet stockworks that had been previously identified by historic exploration work (view Project History on the Company’s website). Additional prospecting work will be completed at the same time as the ‘confirmation’ rock sampling with the objective being to increase the extent of the known zones of gold mineralization and to discover new zones.

Riverside’s President and CEO, John-Mark Staude, stated: “During March-April, our Hermosillo-based team completed a number of tasks to initiate the 2017 Cecilia work program. This included obtaining access agreements from owners of surface lands that cover the Project area and setting up a temporary field camp close to the property. We now have our team in the field sampling and mapping toward defining high-quality drill targets. Riverside is committed to turning over prospects quickly and advancing the Company’s portfolio with a clear focus on discovery and value creation. We look forward to a steady flow of news and results from work programs in the weeks and months ahead.”

Priority gold targets that are being refined by Riverside’s rock sampling program are the North Breccia Zone and the Central Zone (see Figure 1 below), both located on the north-eastern slope of Cerro Magallanes, the prominent topographic feature formed by the volcanic flow-dome complex at the centre of the Project area. Historical sampling of the North Breccia target showed this zone of brecciated rhyolite as containing mineralization grading 2.19 g/t gold (Au) across 25 metres. A drill-hole that tested this zone yielded an intercept that averaged 1.41 g/t Au across 30.0 metres, starting 4.0 metres down the hole. At the Central Zone, a linear array of gold showings were previously sampled down the eastern slope of the peak. Historical sampling results from the inferred easterly striking, sub-vertical structure include 33 metres averaging 1.18 g/t Au and 16 metres of 1.29 g/t Au and 40.8 g/t silver. 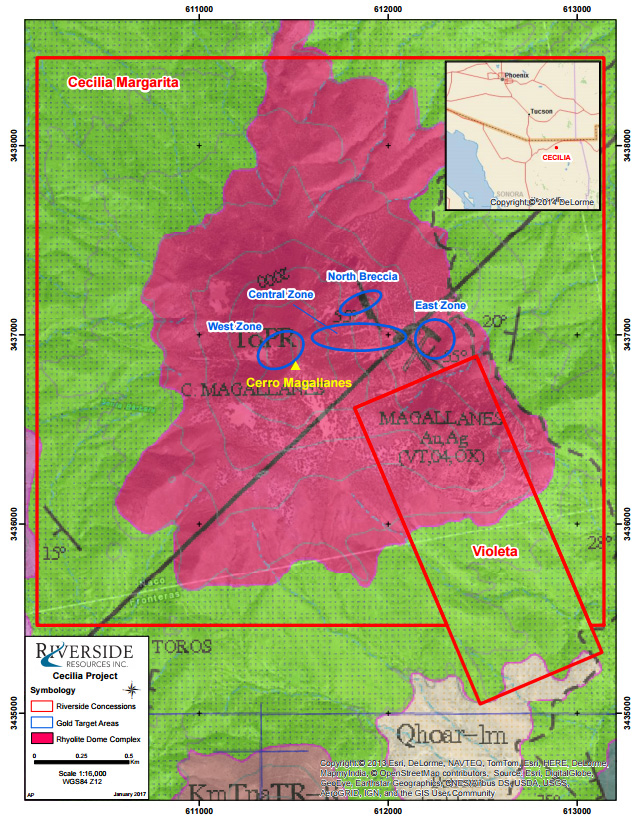 Gold assays and multi-element geochemical data obtained by this first-phase surface sampling program will be compared to, and integrated with rock geochemical data that has been compiled from the project databases completed by companies that previously explored the Cecilia mineral system. Once the current rock sampling program has been completed and the analytical data integrated into the Company’s project-wide database, the focus of work will be the construction of a 3D model of the litho-structural setting of the flow-dome complex as well as the controls on the epithermal mineral system that is interpreted to be genetically linked to the volcanic complex. This will lead to the definition of specific, high-potential drill targets.

For more information on the Project, please visit the Cecilia Project page on the Company’s website: www.rivres.com.

Disclosure Note: The above-described exploration work programs and the analytical results that were reported by previous operators on the Cecilia property are considered to be historical. The reliability of the historical data is uncertain but is considered to be relevant by Company management. It is the Company’s intention to verify, wherever reasonably possible, the most significant historical data; however, there is a risk that the Company’s confirmation work or future drill testing may produce results that substantially differ from the historical results.

Qualified Person & QA/QC:
The scientific and technical data contained in this news release pertaining to the Cecilia Project was reviewed and approved by Locke Goldsmith, P.Geo, P. Eng, a non-independent qualified person to Riverside Resources, who is responsible for ensuring that the geologic information provided in this news release is accurate and who acts as a “qualified person” under National Instrument 43-101 Standards of Disclosure for Mineral Projects.

About Riverside Resources Inc.:
Riverside is a well-funded exploration team of focused, proactive gold discoverers. The Company currently has more than $6,000,000 in the treasury and less than 45,000,000 shares outstanding. The Company’s model of growth through partnerships and exploration uses the prospect generation business approach to own resources, while partners share in de-risking projects on route to discovery. Riverside has additional properties available for option with more information available on the Company’s website at www.rivres.com.