Riverside Resources Samples up to 5.45 G/T Gold and Establishes 5 Priority Drill Targets at The Cecilia Gold Project in Sonora, Mexico

July 25, 2017 – Vancouver, BC: Riverside Resources Inc. (“Riverside” or the “Company”) (TSX-V: RRI), is pleased to announce that the Company has completed the first phase of self-funded exploration at the Cecilia Gold Project (the “Project”)located in northeastern Sonora, Mexico. Riverside is targeting epithermal gold-silver mineralization within and beneath a felsic volcanic flow-dome complexwhich is similar in age and composition to the dome complexes that are associated with the large La Pitarrilla and San Julian Ag(-Au)-Pb-Zn deposits found in the Mexican state of Durango.

Highlights of Riverside’s second batch of sampling results included 8.0 and 9.7 metre wide zones of gold mineralization at the North Breccia Zone that averaged 3.90 g/t Au and 1.18 g/t Au, respectively. These intervals encompass a total of 8 chip-channel samples 1.80 to 3.0 metres in length. About 400 metres southwest of the North Breccia Zone an altered fault structure was mineralized, with a 3.0 m wide zone showing an average grade of 5.45 g/t Au. The Company’s exploration program has successfully outlined a number of priority drill targets and Riverside has now started the application process for drill permitting.

Riverside’s President and CEO, John-Mark Staude, stated: “Riverside acquired the Cecilia gold Project because our geologists view the volcanic complex at the heart of the Project as being a prime setting for a major epithermal mineral system, predominantly gold-bearing at higher levels and possibly more silver rich at lower elevations. The fieldwork we have completed so far, combined with the compilation and analysis of historical data, further supports this view.  We have at least five high-potential gold targets defined at the Project, which are being permitted for drilling.”

A key component of Riverside’s exploration program was to confirm the existence of multiple zones of gold-bearing hydrothermal breccia and quartz stockwork veining that had been sampled decades ago by other groups, including Chesapeake Gold Corp., Cambior Explorations and the Consejo de Recursos Minerales, the predecessor to Mexico’s geological survey, Servicio Geologico Mexicano. (for details, see Project History on the Company’s website). Riverside accomplished this by collecting and analyzing a total of 406 rock samples from the Project’s four main gold zones, the North Breccia, Central, West and East Zones (see Figure 1, below).  Bedrock exposures in areas surrounding the four prospects were also sampled with the objective of expanding the known zones of gold mineralization. The distribution of 1,443 historical rock samples plus 371 Riverside samples is shown in Figure 1. Clusters of samples with gold concentrations greater than 0.3 g/t Au clearly define the above-mentioned gold zones.  Importantly, gold mineralization at Cecilia is seen to be widespread, occurring over an area that is roughly 1,200 metres by 400 metres, and it is also found over an elevation range of more than 400 metres. 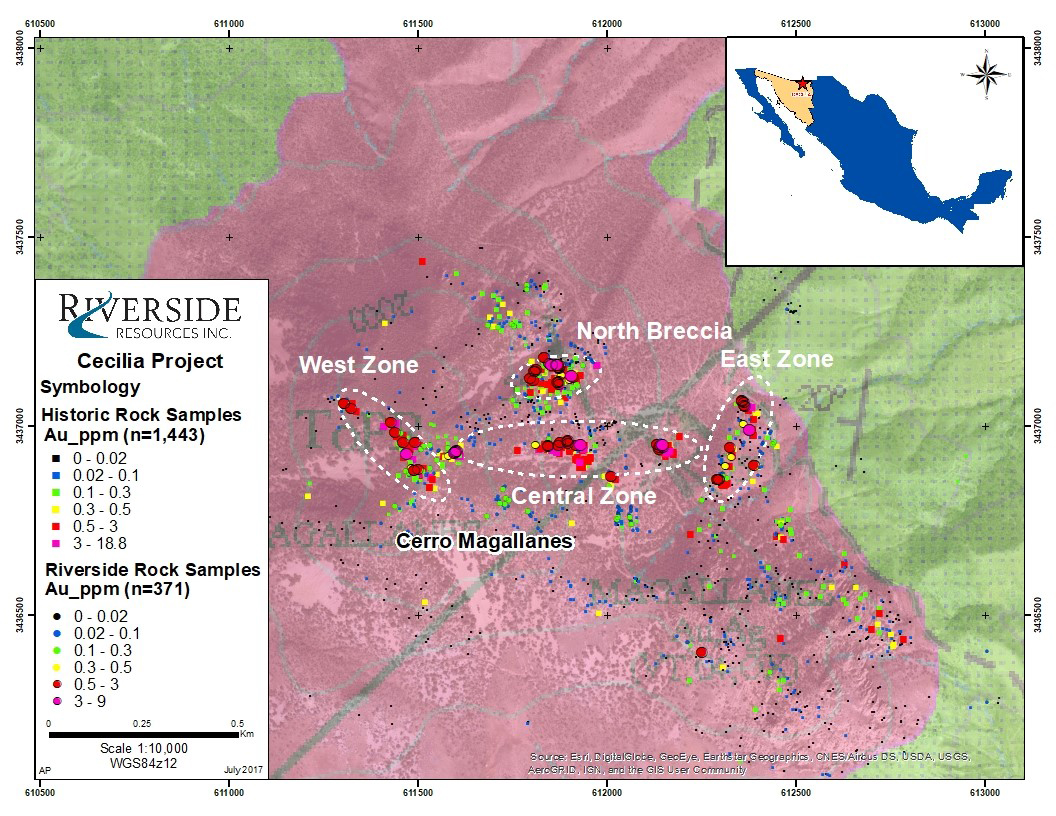 In addition to its rock sampling program, Riverside’s geologists compiled and reviewed geological and geochemical data sets that had been generated over a 35-year history of modern exploration at Cecilia. This database includes drill-hole logs and core sample analyses for 19 diamond boreholes (3,817.6m), maps and hundreds of rock-channel assays for twenty underground workings that reportedly date back to the 1940s, as well as multi-element analyses for 1,979 surface rock samples. A basic statistical analysis of gold assays obtained by Riverside and two previous companies is shown in Table 1.

Specific drilling targets have now been selected at Cecilia and a work permit application for a drilling program is being prepared for Mexico’s environmental agency, SEMARNAT. Such permits are typically received 2 to 3 months after applications are submitted. The selection of Riverside’s drill targets was guided by gold assay data for surface and underground rock samples that were viewed in the context of a geological and exploration model of the Cerro Magallanes volcanic flow-dome complex. This model was developed by Riverside’s geologists and is based on other flow-dome complexes in Mexico where economically important ore systems are found (eg. La Pitarrilla, San Julian).

Riverside’s planned drill-holes have been designed to test the North Breccia, Central and East gold zones using borehole orientations that in most cases will be at least 90° to the azimuth directions of the historic drill-holes, i.e. the planned holes will be directed to the south or southwest instead of to the northwest. Many of the boreholes drilled in 1995 are interpreted to have been oriented subparallel to the main mineralized structures, consequently missing their targets. Existing drill roads, with minor upgrading, will facilitate future drilling.

Some of Riverside’s proposed drill-holes are designed to test deeper levels of the volcanic complex to explore for feeder structures that may control large epithermal quartz veins containing high-grade gold-silver mineralization. Such mineralization was found in boulders scattered at the entrances to a few of the old underground workings at the Central Zone (see press release on June 6, 2017). Select samples of this type of quartz veining yielded gold assays of 13.9 g/t Au 19.0 g/t Au, 55.0 g/t Au and 133.7 g/t Au, with corresponding silver assays of 20.7 g/t Ag, 335.0 g/t Ag, 288.0 g/t Ag and 87.8 g/t Ag.

Riverside’s President and CEO, John-Mark Staude, added: “Riverside is actively discussing potential joint-venture partnerships with a number of parties on multiple projects in the Company’s portfolio. We have several projects with high-quality drill targets and are committed to securing multiple new partnerships, while also completing a self-funded drill program by the end of the year. We believe this approach exposes our shareholders to the most catalysts and discovery upside.”

Qualified Person & QA/QC:
The scientific and technical data contained in this news release pertaining to the Cecilia Project was reviewed and approved by Ron Burk, P. Eng, a non-independent qualified person to Riverside Resources, who is responsible for ensuring that the geologic information provided in this news release is accurate and who acts as a “qualified person” under National Instrument 43-101 Standards of Disclosure for Mineral Projects.

The rock chip samples collected by Riverside's field crew at the Cecilia Project were taken from bedrock outcroppings on the slopes of the prominent mount of Cerro Magallanes, with the majority of individual samples consisting of composites of bedrock fragments hammer-chipped from 1.1 to 3.1 metre long intervals across rock faces showing evidence of hydrothermal alteration. A total of 406 rock-chip samples were collected and analyzed by Riverside, 12 of which consisted of select grab samples of loose quartz vein rock found on waste-rock dumps of small underground workings that exist at the core of the Project. Assay results for these select samples are not plotted on the map shown in Figure 1. All of Riverside's rock samples were analyzed at the Hermosillo and Vancouver laboratories of Bureau Veritas where gold content was determined by fire assaying with atomic adsorption finish and ICP-mass spectrometry was used to analyze for 45 other elements. For quality control purposes, 14 standard samples and 7 'blank' samples were included with the batch of 406 field samples from the Project.

About Riverside Resources Inc.:
Riverside is a well-funded prospect generator exploration company with over $5,000,000 in the bank and a tight share structure with fewer than 45M shares issued. Riverside leverages its 77,000 location Mexico mineral database, highly experienced and dedicated technical team and partnership network to acquire and develop high-potential projects. The Company increases the chances of discovery by advancing multiple assets simultaneously through partnerships, allowing Riverside to mitigate risk and conserve capital. Riverside has a diverse portfolio of gold, silver and copper properties throughout North America. Riverside has additional properties available for option with more information available on the Company’s website at www.rivres.com.