Vancouver, British Columbia--(Newsfile Corp. - August 17, 2020) -  Riverside Resources Inc. (TSXV: RRI) (OTCQB: RVSDF) (FSE: R99) ("Riverside" or the "Company"), is pleased to report that the Company is continuing with its generative exploration and geologic data driven targeting approach in staking the High Lake Greenstone Belt west of Kenora, Ontario. The project area is roughly 230 km2 and extends from Kenora, west to the Manitoba provincial border. The claims block is roughly 20 km in length and immediately south and parallel to the Trans-Canada Highway providing good exploration access. Greenstone belts in western Ontario are highly prolific and synonymous with high-grade gold production. The Red Lake district to the north has produced over 29M ounces of gold and the Rainy River deposit to the south produces roughly 250k ounces annually and hosts 6M ounces in reserves and resources1.

Riverside's staking program focused on an underexplored greenstone belt south of Highway 17 west of Kenora. The project area has been subject to gold exploration since the 1800's and hosts a number of known showings and past drill programs. Additionally, the project hosts 16 Mineral Deposit Inventory (MDI) locations indicating a wide belt of mineralization has been recognized in the literature. While most of the historical work appears to have focused on shear-hosted gold there are known showings of volcanogenic massive sulfide (VMS) style mineralization in the belt as is typical in the other well endowed, greenstone gold belts. The metamorphic grades, structural geology, and presence of intrusions are all guides Riverside is immediately applying for this summer's gold exploration program.

Riverside's President and CEO, John-Mark Staude, stated: "We continue our Company's generative approach acquiring district scale projects whereby major mining companies can work systematically with Riverside and without serious third-party ownership interference. This Greenstone belt has been largely ignored since the last gold cycle. With recent discoveries in Red Lake and Rainy River explorers have focused on those areas and we believe the potential for new discoveries in this belt is excellent with the application of modern exploration approaches." 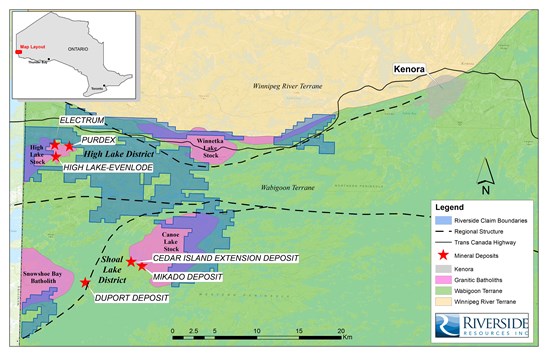 The High Lake Greenstone Project lies west of the Lake of the Woods greenstone terrain, part of the Archean aged Wabigoon Sub-province of the Superior Geological Province in northwestern Ontario. The western Wabigoon region which hosts many gold systems and has been a productive gold region is characterized by interconnected, arcuate, metavolcanic dominated 'greenstone belts' surrounding large elliptical batholiths similar to major districts world-wide. The metavolcanic component of this greenstone belt includes abundant mafic (tholeiitic, calc-alkalic and minor alkalic) to felsic (mostly calc-alkalic) varieties. Minor clastic metasedimentary deposits are associated with some of the intermediate to felsic volcanism. Granitoid rocks within the region include large elliptical to multi-lobate batholiths that define the architecture of the greenstone belts. Smaller stocks in the region are predominantly late- to post-tectonic and range compositionally from diorite to granite and syenite. This tectonic framework provides an ideal setting for the exploration potential of large gold systems.

The deformational style of much of the western Wabigoon region is dominated by structural domes cored by large batholithic masses giving rise to apparent synclinal keels of greenstone belts surrounding the batholiths. The claim block contains several of these greenstone keels and will be a structural feature to immediately assess later this summer during the field program. The region also shows evidence for early recumbent folding and thrust faulting as well as a later phase of transcurrent shear. Greenschist-grade regional metamorphic mineral assemblages characterize much of the greenstone belt as is typical for the favorable metamorphism for gold systems. U-Pb geochronological constraints indicate that metavolcanic rocks were deposited between 2775 and 2711 Ma whereas the large granitoid batholiths tend to be younger than 2710 Ma. Small, post-tectonic plutons were emplaced over a 15 Ma interval commencing at ~2699 Ma, placing the geology of the Riverside claim block in the similar lithotectonic chronology of other surrounding major gold belts, (Ayer, 1989).

The Wabigoon subprovince is similar to the Wawa-Abitibi to the east and the Rainy Lake greenstone belts to the south in many structural and geologic ways. The Rainy River mineral reserves and resources (New Gold Inc., 2018) include Proven and Probable of 2.6M oz Au + 6.2M oz Ag and Measured and Indicated of 1.9M oz Au + 5.1M oz Ag making this terrain and similar greenstones belts favorable areas for gold and base metal exploration.

The informal term ʺHigh Lake Greenstone Beltʺ has been introduced by the company and represents a succession of volcanic +/- sedimentary units bounded to the north by the a gneissic tonalitic suite of the Winnipeg River Subprovince, to the east by the Dryberry batholith and to the south by the Auineau Batholith.

Geographically connected to the project at the southern boundary are the Shoal Lake deposits comprising two geographically connected gold and silver resources. Two of the past producers, the Duport Deposit and the Cedar Island Extension Deposit, have significant reserves. The Duport Deposit has undergone extensive underground development with a decline extending to a depth of 660 feet and total reserves estimated at 2.0 million tons averaging 0.36-ounce gold per ton. The Cedar Island Extension Deposit has estimated reserves, based on diamond drilling, of 1.5 million tons averaging 0.25-ounce gold per ton (Canadian Mines Handbook 1989-90).

The project borders another gold center at High Lake. The High Lake gold project consists of Archean basic volcanic rocks intruded by later Archean porphyritic granodiorite. The mineralization, which is hosted by both rock types, is controlled by regional shear joints trending N60E and dipping northwest at 75 to 85 degrees.

Gold mineralization is concentrated in vein systems hosted by permeable ductile and brittle fault zones. They appear to have formed in response to the regional deformation events particularly in around the Canoe Lake and High Lake stocks have shown that gold mineralization appears to have formed at the same time as, but peripheral to, porphyry-style copper and molybdenum mineralization and associated potassic alteration (Smith et al. 1988). In addition to the strong association with felsic intrusions, a significant number of gold occurrences are hosted by deformation zones that transect the project area. Many of these occurrences are far removed from the contact aureoles of late-tectonic intrusions. Three factors appear to determine the locus of the more significant deformation zone occurrences (Ayer, 1989).

Copper and zinc mineralization are reported with iron sulphides as disseminations and veins in mafic metavolcanic rocks and as disseminations in interbedded cherty and graphitic metasedimentary rocks. Molybdenum, copper and gold mineralization in widely spaced fractures associated with complex zonal alteration patterns is associated with the High Lake stock and Canoe Lake stock (porphyry copper-style mineralization). The Even lode prospect on the east side of High Lake has diamond-drill estimated reserves of 126 000 tons grading 0.68% MoS2 and 0.015-ounce gold per ton (Davies and Smith 1988).

Pyrite always accompanies the gold mineralization; chalcopyrite is often present with some samples assaying up to five per cent copper. Drilling in 2005 by Cabo Mining found gold mineralization associated with arsenic, while the important geological controls appear to be quartz porphyries in contact with metasedimentary rocks. Geological drill logs indicate this drilling intersected a 1m wide vein within a larger shear zone that returned 9.3 g/t Au. This zone was nested within sheared, sericitic and carbonated rock containing 2% to 3% sulphides. This mineralization occurs near the upper contact of 17.9-metre-wide unit within the quartz-porphyritic margin of the High Lake granitic stock. A number of other gold occurrences in this area are thought to be in a similar geological structure, (Sears, 2007).

Riverside's summer fieldwork season for this project will combine surface geochemistry and surface mapping to expand upon the structural geology work completed by others and build upon the compiled databases the Company has developed through its data driven approach. The High Lake Greenstone Belt is bisected by a large regional east-west striking shear zone similar to the Pipestone-Cameron regional fault to the southeast. Riverside's mapping will continue to be compiled and integrated with GIS data to determine the primary structural controls and if folding is a key control to mineralization with an initial focus on the High Lake and Canoe Lake stock areas.

The scientific and technical data contained in this news release pertaining to the Ontario Projects was reviewed and approved by Freeman Smith, P.Geo, a non-independent qualified person to Riverside Resources, who is responsible for ensuring that the geologic information provided in this news release is accurate and who acts as a "qualified person" under National Instrument 43-101 Standards of Disclosure for Mineral Projects.

Regarding previous historical operators work and resource estimates: The reliability of historical data is uncertain but is considered to be relevant by Company management for focusing exploration work; however, all past work will have to be examined and resampled for the purposes of reporting.

Riverside is a well-funded exploration company driven by value generation and discovery. The Company has no debt and less than 68M shares outstanding with a strong portfolio of gold-silver and copper assets in North America. Riverside has extensive experience and knowledge operating in Canada and Mexico and leverages its large database to generate a portfolio of prospective mineral properties. In addition to Riverside's own exploration spending, the Company also strives to diversify risk by securing joint-venture and spin-out partnerships to advance multiple assets simultaneously and create more chances for discovery. Riverside has additional properties available for option, with more information available on the Company's website at www.rivres.com.

Certain statements in this press release may be considered forward-looking information. These statements can be identified by the use of forward-looking terminology (e.g., "expect"," estimates", "intends", "anticipates", "believes", "plans"). Such information involves known and unknown risks -- including the availability of funds, the results of financing and exploration activities, the interpretation of exploration results and other geological data, or unanticipated costs and expenses and other risks identified by Riverside in its public securities filings that may cause actual events to differ materially from current expectations. Readers are cautioned not to place undue reliance on these forward-looking statements, which speak only as of the date of this press release.

To view the source version of this press release, please visit https://www.newsfilecorp.com/release/61913