September 21, 2020 – Vancouver, BC: Riverside Resources Inc. (“Riverside” or the “Company”) (TSX-V: RRI) (OTCQB: RVSDF) (FSE: R99), is pleased to provide an update on the current work program which included rock sampling and drill pad construction ahead of drilling at the Cecilia Project (the “Project”) in Sonora, Mexico. The Project is currently under option with Carlyle Commodities Corp (see press release of July 15, 2020) as both companies prepare for an upcoming drill program. Riverside is acting as the operator progressing modeling of drill targets with a key focus at the Cerro Magallanes where Riverside has identified various high-grade gold targets. The heart of Cerro Magallanes is a large, multiphase mineralized rhyolitic dome complex with four defined targets: San Jose, North Breccia, Central Target and East Target; all of which have returned high-grade samples including up to 133.7 g/t gold and 288 g/t silver (see press release of June 6, 2017). The recent work has focused on channel sampling at the San Jose and North Breccia targets with more results expected in the coming weeks.

The ongoing Phase 1 exploration program under the Carlyle-option has delivered additional data, which includes:

Ongoing and upcoming results include:

Throughout September, Riverside and Carlyle will be integrating and completing this work in preparation for the upcoming drill program.

Riverside’s President and CEO, John-Mark Staude, stated: “Riverside is working hard with Carlyle as its partner at the Cecilia Project. Our geologists and operational team have done a fine job technically managing the program during these COVID times to complete safe and effective work. The high-grade samples crossing high level structures could point to wider potential targets below and we look forward to drilling at San Jose and North Breccia in the near future.”

Exploration at Cerro Magallanes Target:
Phase 1 exploration has defined and confirmed extensive high-grade mineralization on surface at the San Jose and North Breccia targets as highlighted in Figure 1 below. The latest sampling returned 43.2 g/t Au and 5.6 g/t Au from part of a more extensive structural corridor for which historical work has defined over 300 m in strike length and 20 m in width. Sampling in 2017 by Riverside from a mine dump area returned samples of 133.7 g/t Au and 58 g/t Au. Current interpretation suggests a potential intersection at depth of the San Jose and North Breccia structures identifying possible bonanza style mineralization. 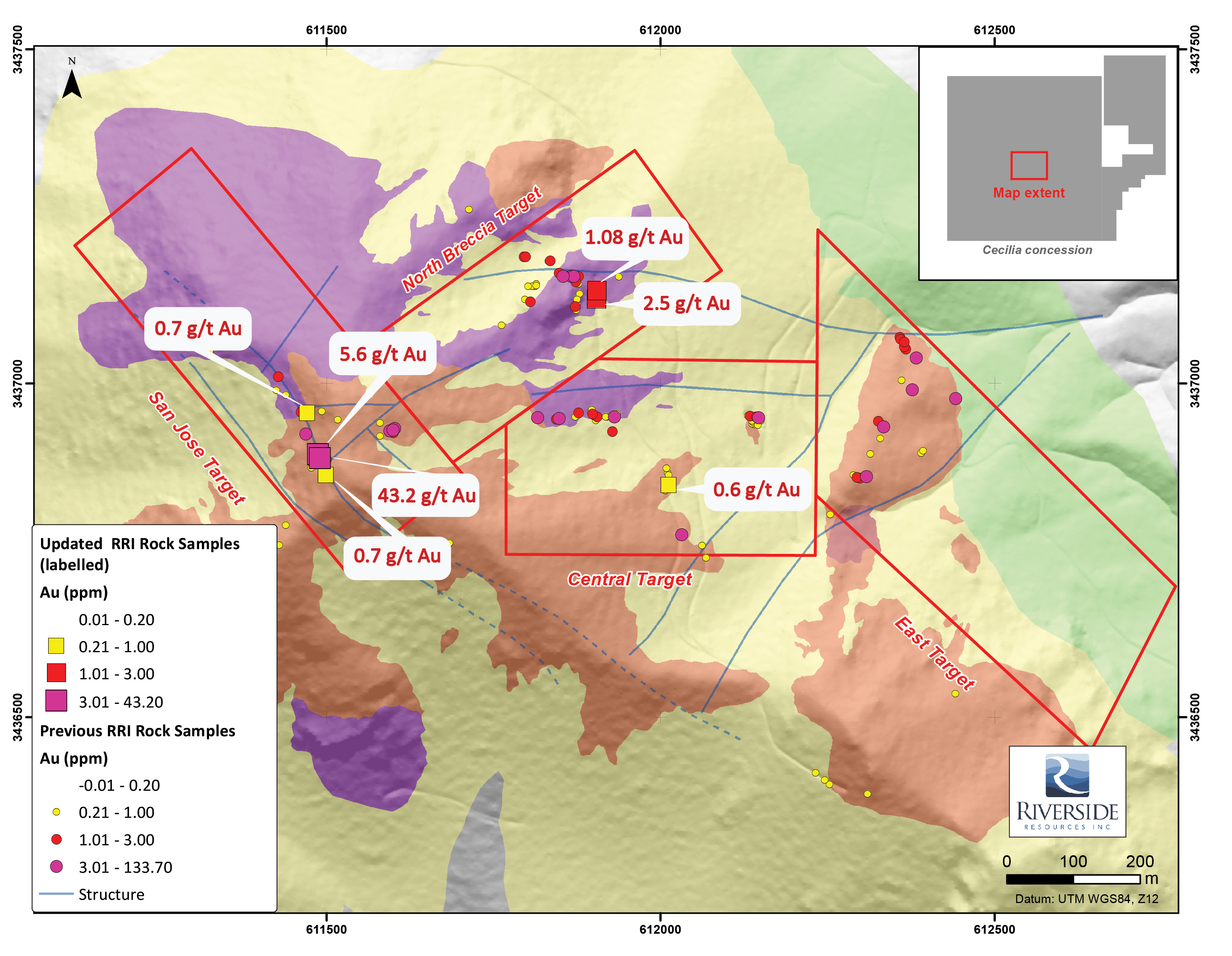 Mineralization at the San Jose target consists of grey quartz, opalescent silica, fluorite and silicification within structural breccia and upper dome shears. The primary structure is oriented northwest along which conjugated structures form sets of northeast and easterly oriented faults. It is interpreted that the primary fluid path for mineralizing fluids follows a northwestern lineament, which allows ore shoot deposition of gold and silver mineralization at fault intersections as well as along dome margins. The mineralization at the San Jose target is similar to the deposits described in the Parral District in Chihuahua, Mexico where fluorite-barite is spatially located above the larger gold-silver veins. Similarly, the San Julian mine operations of Fresnillo Mining Company has identified a dome center with over 1.7M Oz Au and 330M Oz Ag in resources and reserves (Fresnillo Annual Report, 2019). Gold mineralization at the San Julian deposit is associated with a feeder trunk from depth within the rhyolite dome and its margins.

The North Breccia, Central and East targets are associated with increases in precious and base metals, showing boiling textures and dissolution of clasts. These indicators make us believe that historical drill holes and recent surface work could define a shallow horizon (upper levels) within an epithermal system.

Exploration at district scale:
New data from soil sampling and Aster processing show a corridor of alteration following northwest and northeastern oriented structures as shown in Figure 2 below. In addition, widespread gold-bearing quartz veins with gold values up to 12.5 g/t Au confirm the presence of fluid migration throughout the property and especially along northeastern structures. The divergence in orientation of the northwestern Cerro Magallanes primary fluid migration path and the northeastern trend outside of the dome could be explained by difference in rheology for which the rhyolite dikes act as an aquiclude in the sedimentary units. This interpretation has helped guide target definition as noted in Figure 2. 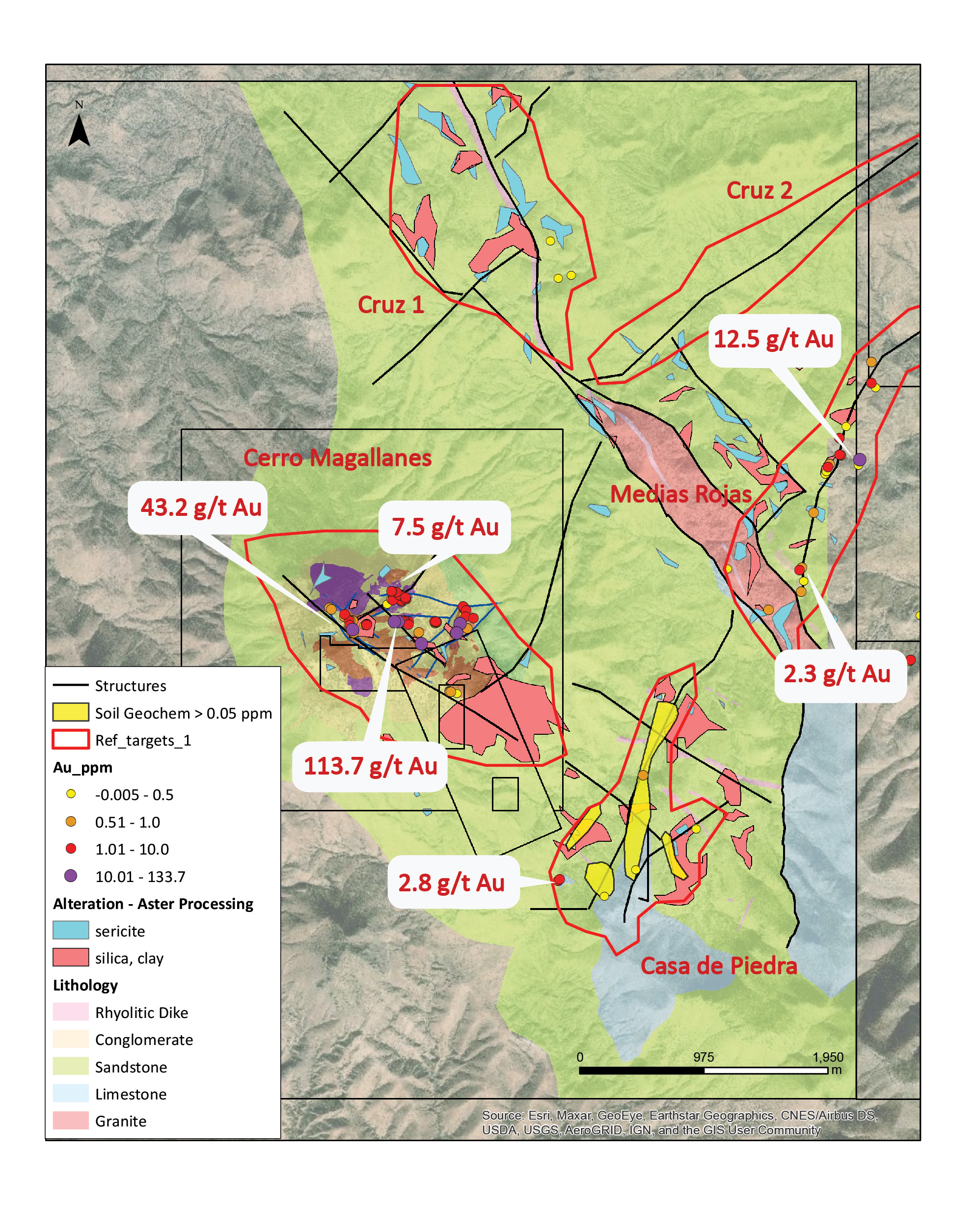 Future work over the sedimentary basement will include detail structural and vein mapping to assist with future drill programs.

Qualified Person and QA/QC:
The scientific and technical data contained in this news release pertaining to the Cecilia Project was reviewed and approved by Freeman Smith, P.Geo, a non-independent qualified person to Riverside Resources, who is responsible for ensuring that the geologic information provided in this news release is accurate and who acts as a “qualified person” under National Instrument 43-101 Standards of Disclosure for Mineral Projects.

Rock samples collected at Cecilia were taken by Riverside geologists to the Bureau Veritas Laboratories in Hermosillo, Mexico. The samples were prepared in Hermosillo and the pulps transported to Bureau Veritas’ laboratory in Vancouver, Canada for four acids for 45 element ICP/ES-MS analysis. As part of a QA/QC program standard samples were randomly inserted into the sample stream prior to being sent to the Hermosillo laboratory.

Regarding previous historical operators work on the Cecilia Project. The reliability of historical data is uncertain but is considered to be relevant by Company management as a portion of the historical sampling was resampled and verified; however, there is a risk that the Company’s confirmation work or future drill testing may produce results that substantially differ from the historical results.

The reader is cautioned that rock grab samples are selective in nature and may not represent the true grade and or style of mineralization across the property. Historical information contained in this news release and included figures regarding the Cecilia project is reported for historical reference only.

About Riverside Resources Inc.:
Riverside is a well-funded exploration company driven by value generation and discovery. The Company has no debt and less than 68M shares outstanding with a strong portfolio of gold-silver and copper assets in North America. Riverside has extensive experience and knowledge operating in Mexico and Canada and leverages its large database to generate a portfolio of prospective mineral properties. In addition to Riverside’s own exploration spending, the Company also strives to diversify risk by securing joint-venture and spin-out partnerships to advance multiple assets simultaneously and create more chances for discovery. Riverside has additional properties available for option, with more information available on the Company’s website at www.rivres.com.

Certain statements in this press release may be considered forward-looking information. These statements can be identified by the use of forward-looking terminology (e.g., "expect"," estimates", "intends", "anticipates", "believes", "plans"). Such information involves known and unknown risks -- including the availability of funds, the results of financing and exploration activities, the interpretation of exploration results and other geological data, or unanticipated costs and expenses and other risks identified by Riverside in its public securities filings that may cause actual events to differ materially from current expectations. Readers are cautioned not to place undue reliance on these forward-looking statements, which speak only as of the date of this press release.