March 5, 2018 – Vancouver, BC: Riverside Resources Inc. ("Riverside" or the "Company") (TSX-V: RRI), is pleased to announce that the Subdirección de Minas in Hermosillo, Sonora, a division of Mexico’s federal mining agency, has granted the Company the mineral rights to the Cecilia 1 concession, which had been applied for in November of 2017. Obtaining the Cecilia 1 claim significantly increases the total area covered by Riverside’s Cecilia Gold Project (the “Project”), which is located in northeastern Sonora.

Riverside’s President and CEO, John-Mark Staude, stated: “Riverside has worked hard to consolidate and expand the Cecilia land position, as we did not want to push ahead with drilling until the great property package was tied up. This is a very significant step for us and the Project. Cecilia is a large, high-quality project and now with this key acquisition we lock up at least four new target areas adding significant value to the Cecilia project.”

The addition of the Cecilia 1 concession to the existing claim group significantly increases the exploration potential of the Project. The new claim covers a second felsic intrusive dome south of the mineralized Cerro Magallanes dome complex which has been the focus of exploration to date. In addition, the new claim covers several kilometers of strike-length of inferred northwesterly trending faults which represent target structures for vein-hosted, high-grade gold-silver deposits or possible fluid conduits for bulk-tonnage mineralization. Previous exploration programs at Cecilia, including the drilling of 23 diamond boreholes, were concentrated on the northern slopes of Cerro Magallanes; very little work has been done on the surrounding lands covered by the Cecilia 1 concession (see Figure 1 below). 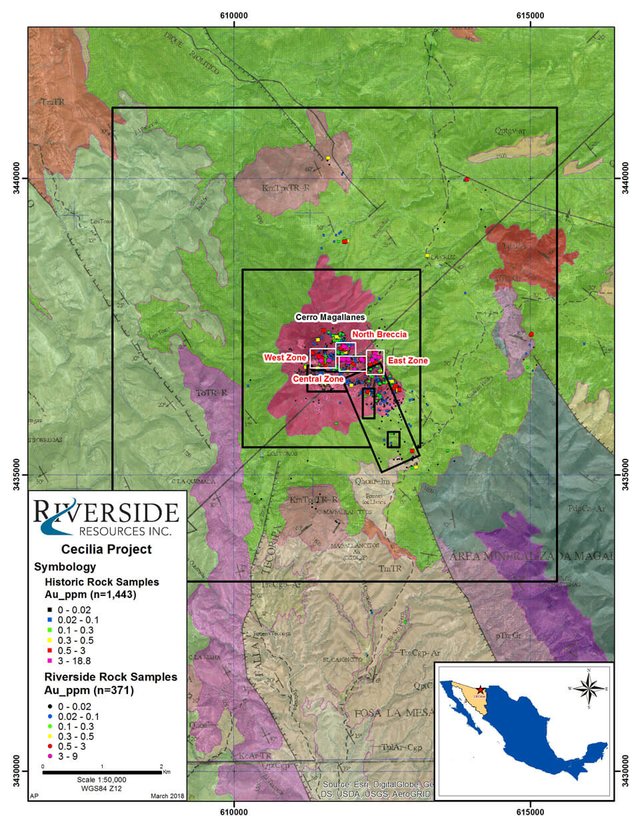 The scientific and technical data contained in this news release pertaining to the Cecilia Project press release was reviewed and prepared under the supervision of Ronald Burk, P. Eng., a non-independent qualified person to Riverside Resources who is responsible for ensuring that the geologic information provided in this news release is accurate and acts as a “qualified person” under National Instrument 43-101 Standards of Disclosure for Mineral Projects.

Riverside is a well-funded exploration company that is driven by value generation and discovery. The company has $3,000,000 in cash, less than 45M shares issued and a strong portfolio of gold-silver and copper assets in North America. Riverside has extensive experience and knowledge operating in Mexico and leverages its large database to generate a diverse portfolio of properties. In addition to Riverside’s own exploration spending, the Company also aims to diversify risk by securing joint-venture and spin-out partnerships to generate more discovery chances and advance multiple assets simultaneously. Riverside has additional properties available for option, with more information available on the Company’s website at www.rivres.com.