Over the past year Riverside has conducted channel sampling of surface areas over the four main Cerro Magallanes target areas with assay intervals on outcrops that are perpendicular to the existing structures to estimate the true surface widths of the different featured zones. The channel sampling program included 305 samples ranging from <0.05 to 19.00 g/t Au. Sampling shows consistent gold from the top of Cerro Magallanes at the San Jose Target northeast along the Agua Prieta-North Breccia Target and through the Central and East Target areas.

Channel samples with gold values of note shown below on map include:

Disclaimer: Riverside has applied a 5-gram gold cap to these interval calculations in order to mitigate impact of individual high-grade samples. These samples do not cover the entire target thicknesses and further excavations would be needed to expand continuity and provide an indication of gold mineralization context.

*Interval from previous operators work on the Cecilia Project and is historical. The reliability of historical data is uncertain but is considered to be relevant by Company management as a statistically significant portion of the historical sampling was resampled and verified; however, there is a risk that the Company’s confirmation work or future drill testing may produce results that substantially differ from the historical results.

The map below (Figure 1) summarizes highlighted gold intervals from the current program as well as select historical drill-hole intervals from previous operators. 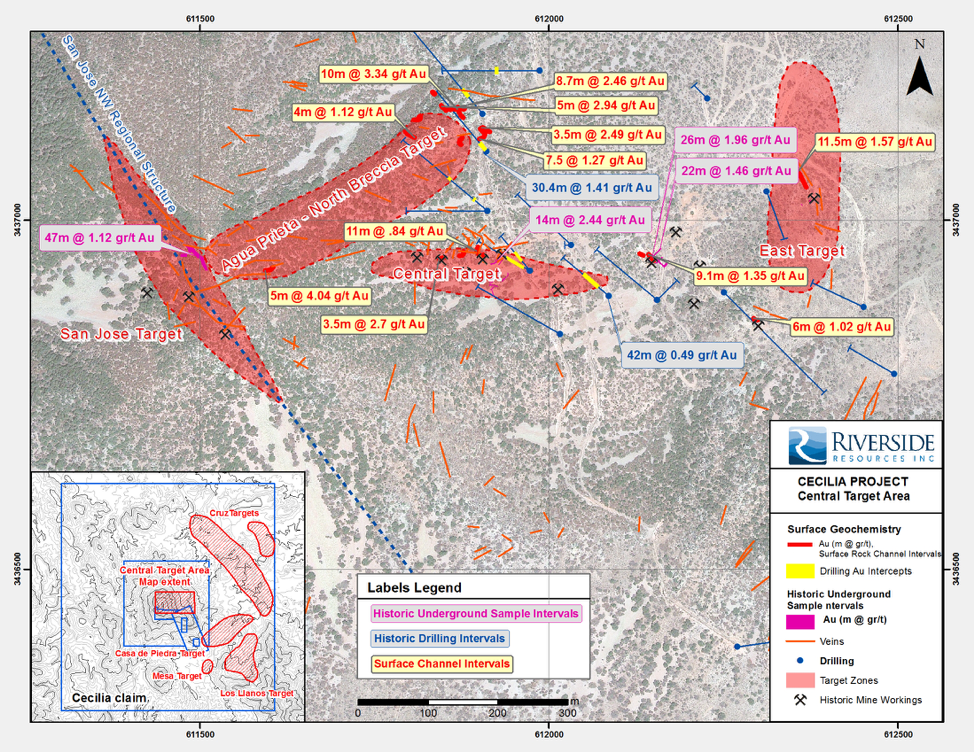 From the sampling in each area Riverside was able to continue to refine the surface character of the specific target areas of the Cerro Magallanes which makes up one zone as shown on the map inset of Figure 1 and Figure 2. Riverside is currently conducting a follow up infill soil sampling, field mapping and rock sampling on the larger Cecilia 1 Claim. 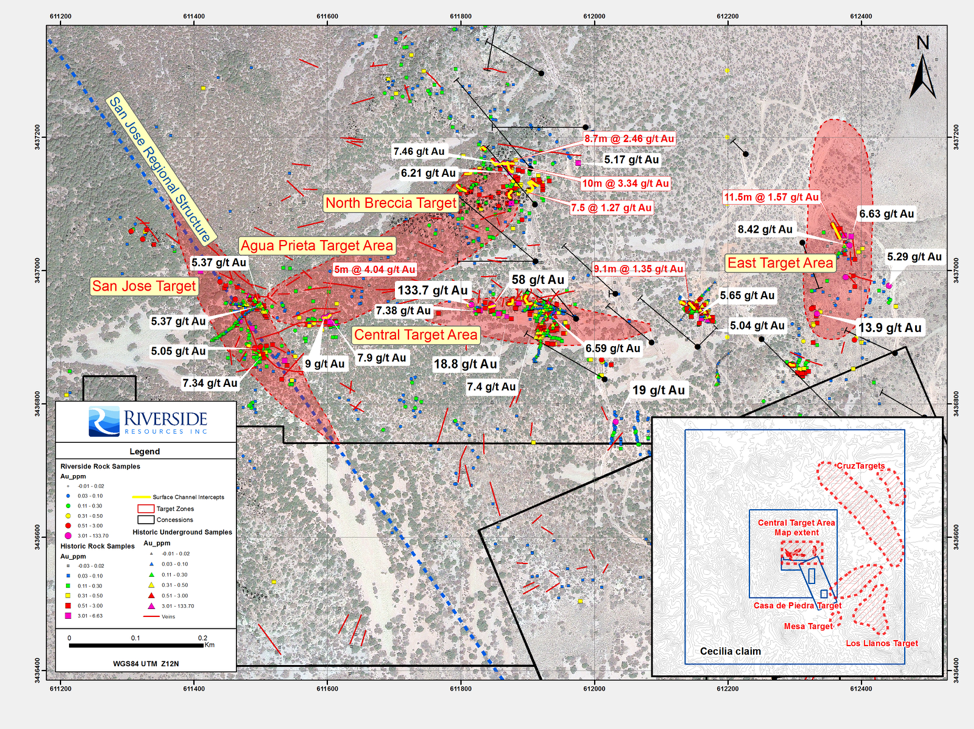 The North Breccia extends upslope to the southwest more than 600 m merging with the Agua Prieta Zone and intersecting the San Jose NW trending Target Zone at the topographic peak of the dome complex. The North Breccia was historically rock chip channel sampled, returning good gold grades. The intersection of the North Breccia and the San Jose structure remain a top priority for drill testing. At the North Breccia and elsewhere on Cecilia the rhyolite dome is the main host unit where gold mineralization has been predominantly found in the breccia matrix. The North Breccia target is typical of dome margin breccias and is like deposits found in Peru, Bolivia, and Colorado where gold is largely hosted in the matrix. These deposit types are favorable hosts for bulk mining scenarios.

The west area of Cerro Magallanes is bisected by a large northwest trending structural zone of up to 60 m wide and hosts more than half a dozen old gold mine workings. Mineralized structures show predominantly silica alteration and commonly dip steeply to the NE with widths of 10-30 m. Sampling by Cambior (1995) within the workings returned 47m @ 1.12 g/t Au along the structural zone, while sampling across the structure by Riverside returned 8m @ 1.50 g/t Au in cross cut #26. The San Jose Target strikes more than 700 m in length and has not yet been drilled, however, historical sampling by Cambior along the structure on surface returned 3 to 9 g/t gold in 2m chip channel samples. These veins show classic epithermal multigenerational opening and filling typical of feeder zones like those at the San Julian Mine in Chihuahua also of the same mid-Tertiary age.

The Agua Prieta and North Breccia form a somewhat continuous zone of gold-bearing silicified breccia that extends northwest, downslope from its intersection with the San Jose target to mid-slope of Cerro Magallanes as shown in Figure 1. Sampling on the dome margin here shows anomalous values and frequent higher-grade gold zones in silicified and brecciated rhyolitic rock.  The new channel sampling has delineated the drill target that lies above the North Breccia. This target begins near surface and extends downward toward the subvolcanic conglomerate and sediments outcropping near the base of Cerro Magallanes. Cerro Magallanes overall appears analogous to the Pitarilla deposit in Durango, Mexico. Pitarilla hosts >500M Oz Ag grading approximately 100 g/t silver [1]. Pitarilla was discovered by the exploration team at Silver Standard (now SSR Mining Inc.), which included Ron Burk, Technical Advisor to Riverside Resources.

The Agua Prieta target has potential to host high-grade structural gold mineralization along the margins of the dome feeder zones and is supported by sampling at the North Breccia Target which returned: 10m @ 3.34 g/t Au and 5m @ 4.04 g/t Au.

Old workings on the northern slopes of Cerro Magallanes from the 1950-60s chased near surface high-grade structures but did not explore at depth. These old workings drifted-in along several different orientations near one another suggesting possible bulk tonnage targeting scenarios may exist. Riverside will be working to assess this scenario following the positive results of the rock channel sampling.

The east target comprises high-grade, fault-controlled, Ag-rich veins along the margin of the Puma Dome located east of Cerro Magallanes dome. Gold in chip channel samples by Riverside along the trace of a portion of the fault structures returned 11.5m @ 1.57 g/t Au. Grab samples from dump material in this area returned silver values of up to 200 g/t Ag.

The East Target is 200 m lower in elevation than Cerro Magallanes and might be showing vertical zoning from gold high on Cerro Magallanes to silver lower down closer to the underlying Cretaceous sedimentary rocks. Follow-up fieldwork will test this hypothesis.

Riverside’s President and CEO, John-Mark Staude, stated: “We continue to advance multiple discussions with prospective partners at Cecilia and whether we partner or sole-fund the Project, Riverside wants to see drilling in the near future to test the targets that have been generated. The district scale targets show strong gold values and good continuity. We are excited about the transformational discovery potential with future trenching and drilling at Cecilia.”

The scientific and technical data contained in this news release pertaining to the Cecilia Project was reviewed and/or prepared under the supervision of Freeman Smith, P.Geo., a non-independent qualified person to Riverside Resources Inc. who is responsible for ensuring that the geologic information provided in this news release is accurate and who acts as a “qualified person” under National Instrument 43-101 Standards of Disclosure for Mineral Projects.

Rock samples collected were taken to the Bureau Veritas Laboratories in Hermosillo, Mexico for fire assaying for gold. The rejects remained with Bureau Veritas in Mexico while the pulps were transported to Bureau Veritas’ laboratory in Vancouver, BC, Canada for 45 element ICP/ES-MS analysis. A QA/QC program was implemented as part of the sampling procedures for the exploration program. Standard samples were randomly inserted into the sample stream prior to being sent to the laboratory.

Riverside is an exploration company driven by value generation and discovery. The company has more than $2,000,000 in cash, fewer than 45M shares issued and a strong portfolio of gold-silver and copper assets in North America. Riverside has extensive experience and knowledge operating in Mexico and leverages its large database to generate a portfolio of prospective mineral properties. In addition to Riverside’s own exploration spending, the Company also strives to diversify risk by securing joint-venture and spin-out partnerships to advance multiple assets simultaneously and create more chances for discovery. Riverside has additional properties available for option, with more information available on the Company’s website at www.rivres.com.