Riverside and BHP have agreed to move forward with a fourth year of generative funding for copper exploration in Sonora, Mexico. BHP Exploration Chile SpA (“BHP”) will fund US$1,600,000 in year 4 on specified properties in the Exploration Financing Agreement (“EFA”) in the copper producing belt of Mexico. The Program will focus on identifying and developing exploration opportunities leading to the discovery of new large copper deposits within an Area of Interest using Riverside’s technical knowledge base of copper systems and strong generative exploration team strategically based in Hermosillo, Sonora.

Generative budgets have increased from US$600,000 in year one, to US$1.6M in this fourth year. This funding is part of a larger overall funding package relating to the portfolio of copper assets that the BHP-Riverside Program has generated by completing extensive exploration work over five district areas. The generative program has secured and consolidated additional prospective ground in high potential copper districts in Sonora see (see Figure 1). 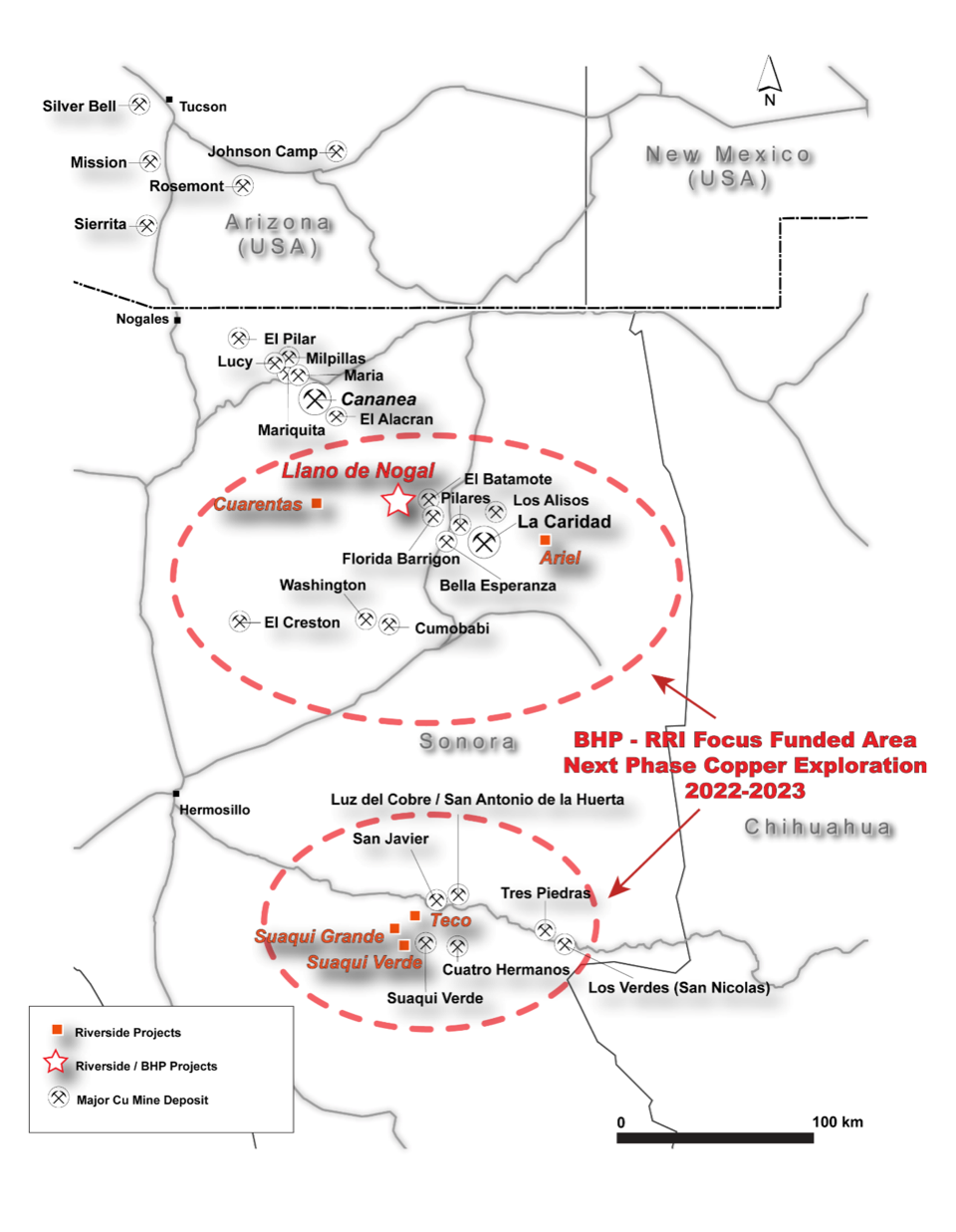 Riverside-BHP Exploration Funding Agreement (“EFA”) will be extended into a fourth year. Building on the past three years of BHP fully funded generative exploration work, the EFA will move into the next exploration phase focusing on five copper projects in Sonora, Mexico with a currently approved US$1,100,000 in exploration funding to work on the Llano de Nogal district and US$500,000 in ongoing High Value Work programs in the Sonora Projects for a total so far allocated budget of US$1,600,000 exploration work on the specified properties in the EFA.

The approved next phase of work focuses toward property specific funding to advance the current priority projects with derisking exploration, geophysics, geology, geochemistry, mineral titles, and other related mineral exploration aspects to progress towards drilling and drill decisions. Additional expanded budgets for drilling will be added as projects are moved forward to the Operational Phase for the Riverside-BHP EFA.

The Chuin Project is a top priority drill project arising from the staking of highly prospective copper prospectively areas using BHP's Machine Learning, Artificial Intelligence-style data integration along with Riverside's extensive generative databases. Together, these efforts provided context from previous Riverside work combined with recent field exploration to move ahead on this large +100 km2 project. The EFA has also completed 1 km spaced Magneto-teluric (MT) geophysics, which has defined a series of interpreted Laramide age porphyry Cu targets which can now be evaluated now with vectored drilling.

A second priority drill project is the Palofierro Project with environmental drill permits currently being processed following the completion of field geochemistry vectoring using propyltic alteration, whole rock, mineral prospect sampling plus gravity geophysics. These tools are being used for modeling the post-mineral gravel cover over the top of regional magnetic low geophysics defining a series of target areas that have porphyry Cu possibilities and for which the drill program will continue our vectoring and district evaluations.

Finally, the remaining three priority districts - Sinoquipe, Penitas, and Montosa - are progressing along with geophysics, with plans for additional funding and continued field work on these projects in the coming weeks. The Company anticipates a second half of 2021 with MT exploration, building upon the over $400,000 in gravity and other exploration work on these three districts over the past 12 months.

In summary, the overall strategy of the EFA is to prioritize the highest potential segments and well-endowed areas within Sonora and to progress them rapidly with a pipeline of prospective copper districts heading toward drill permitting and potential discovery during this calendar year.

BHP will be providing Riverside with US$720,000 to commence the first half of the second year of the Program to continue to grow the portfolio of copper projects which is an increase of US$220,000 from the initial plan and better captures the investment to progress toward a Defined Project. These funds fully cover the continued generative grass-roots copper exploration and project acquisitions within the Laramide copper belt. BHP will make the following US$720,000 deposit at the next 6-month mark near the end of this calendar year. The BHP-Riverside Technical Steering Committee met last week and the program is on track and progressing with a series of properties now acquired and results coming along.

The program has been successful for the first year having identified and developed targets, acquired projects and progressing these through toward drill targeting. The first year saw Riverside bring forward a range of property opportunities and collectively acquiring large tenures with strong porphyry copper potential.

During the First year of the EFA Riverside and BHP completed extensive project reviews, data integration and acquired five (5) new properties in Sonora. These include areas around known systems, new areas based upon geochronology and other data integration. One of the highly important aspects has been the collaborative sharing between BHP and Riverside, with vast historical data and innovative new Machine Learning data integration. Riverside believes its field, tenure, access, and project area specific experience along with new collaborative Machine Learning prospective maps is leading to new ideas and opportunities for new discoveries in Sonora, Mexico.

During year 1 the funding was increased by 20% for specific refinement work on target areas that were generated from the Generative Budget and these additional working areas were evaluated effectively leading to several progressing while others were dropped to focus the team’s efforts on the highest potential opportunities. During this upcoming 2nd year of the EFA the Company expects to actively progress toward drill

During the Project Generation Phase, Riverside will act as the operator and earn a monthly fee plus 10% on internal activities and 5% on third party external contractor work with an estimated ~US$85,000/month for generative work. Riverside’s technical team will carry out generative exploration and work up targets with the aim of moving prospects toward the Project Operation Phase (II).

A prospect that is advanced to the Project Operation Phase will become a DP and will trigger a success fee of US$200,000 payable to Riverside for each prospect so advanced. BHP will fund up to US$5,000,000 for drilling and further exploration on each DP, having the option to become the operator of such DP. Riverside has the option to contribute between 10% and 20% of the exploration expenditures (“Riverside’s Contribution to Expenses”) during this phase, with BHP funding the balance (80-90%) should Riverside elect to participate. BHP may discontinue funding with respect to a specific DP at any time in which case Riverside would be entitled to 100% interest in the project and depending on the funds expended to date, BHP may retain a net smelter returns royalty interest.

Should the program advance a DP to the Joint Venture Stage, a title to the project would be transferred to a joint venture company and the parties would enter into a formal joint venture partners’ agreement. If Riverside’s cash contribution reaches a minimum of 10% in Phase (II), the Company’s deemed initial interest in the joint venture company will be 20%.

The four projects include the previously highlighted: Chuin, Palofierro, Sinoquipe, and Peñitas properties. The projects have now been approved for full funding to move toward further exploration on the Chuin and Palofierro projects and deep geophysics on the Sinoquipe and Peñitas projects which would lead toward additional drill decisions in the near future and will be ongoing for a third consecutive year. Sinoquipe and Peñitas will be progressed with geophysical studies similar to those done at Chuin and Palofierro where BHP and Riverside are preparing targets for upcoming drill programs.

Riverside signed an option agreement to acquire 100% interest of the 98 km2 Llano de Nogal project from Orogen Royalties. The Llano de Nogal Project has become the fifth active work project within the EFA. The new project will have an exploration budget of USD $1,000,000 for the initial work phase of geology, geophysics and geochemistry. Under the terms of the EFA, BHP can earn up to 80% and Riverside up to a 20% interest into Orogen’s mineral concessions of Llano de Nogal by making cash payments totaling US$2.48 million and exploration expenditures of US$5 million over a six-year period with BHP fully funding all generative programs. BHP will fund all generative work to be completed in the Project through the EFA with subsequent work funded by both BHP and Riverside. If the option is fully exercised, Riverside will be entitled to acquire up to a 20% interest of the Project.
About the Llano Del Nogal
Riverside’s Llano del Nogal Project tenure is a land package fully owned by Riverside with indications for porphyry Cu and post-mineral Baucarit middle and late Tertiary gravel cover. Riverside’s tenure is located within the prolific Cananea-La Caridad porphyry copper trend. The Project is located 35 km northwest of the La Caridad mine that after 35 years of historic mining, has a measured and indicated mineral resource of over 6.4 Bt at 0.17% copper. The Project is also located 60 km southeast of the Cananea (Buenavista Mine), one of the world’s largest porphyry copper deposits with a total global resource of over 15Bt at 0.22% copper1 remaining after more than 120 years of continuous mining.

Option Agreement for the Project

The EFA Program is structured such that Riverside can earn up to 20% and BHP can earn up to 80% in the Project which in this specific third party property option case by making cash payments of US$2.48 million and US$5.0 million in exploration expenditures subject to the following schedule which would give BHP-Riverside 100% ownership of the tenure, subject to NSRs:

During the option period, Orogen and Riverside will jointly have the right to exercise and retain any Net Smelter Return (“NSR”) royalty buydown rights with respect to the Suanse claims (0.5% NSR royalty for C$1 million) and the Coyotes claims (1.5% NSR royalty for US$1.5 million).

Once the Option is exercised on Llano de Nogal, the Optionee will grant to Orogen a 1% Production Royalty, of which 0.5% can be purchased for US$10 million within 10 years of the exercise date.

Once BHP has funded all exploration expenditures, other than those expenditures funded by Riverside, amounting up to US$5,000,000, and made other payments to Riverside it will have earned the conditions to convert to up to a 80% owner in a subsequent JV with Riverside. Once BHP has funded all generative expenditures in the Project, Riverside can elect to fund between 10% and 20% of the remaining exploration expenditures. At any time after the Generative program ends, BHP can request Riverside to transfer its rights and obligations under the Agreement for Llano de Nogal Orogen concessions to BHP Exploration Chile SpA (“BHP”) or its affiliates pursuant to the Exploration and Financing Agreement between BHP and Riverside dated May 15, 2019.

Riverside’s mineral concessions at the current time are still controlled by Riverside but may be added to BHP’s earn in interest in the future. Currently Riverside controls these 100% for Llano de Nogal.

The scientific and technical data contained in this news release pertaining to the BHP Exploration Financing Agreement was reviewed and approved by Freeman Smith, P.Geo, a non-independent qualified person to Riverside Resources, who is responsible for ensuring that the geologic information provided in this news release is accurate and who acts as a "qualified person" under National Instrument 43-101 Standards of Disclosure for Mineral Projects.

A Technical Committee (“TC”) will be formed to approve Work Programs and Budgets during Phase (I) and (II). The TC will have two representatives from each of BHP and Riverside with equal voting powers for both groups for DP’s operated by Riverside. For DP’s operated by BHP, BHP will have the casting vote on the TC. 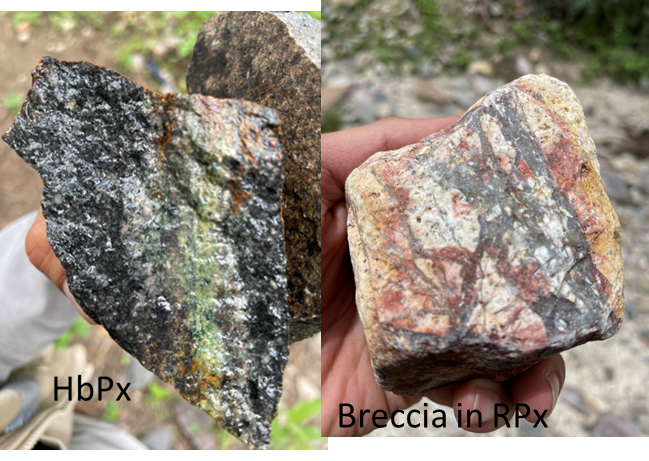 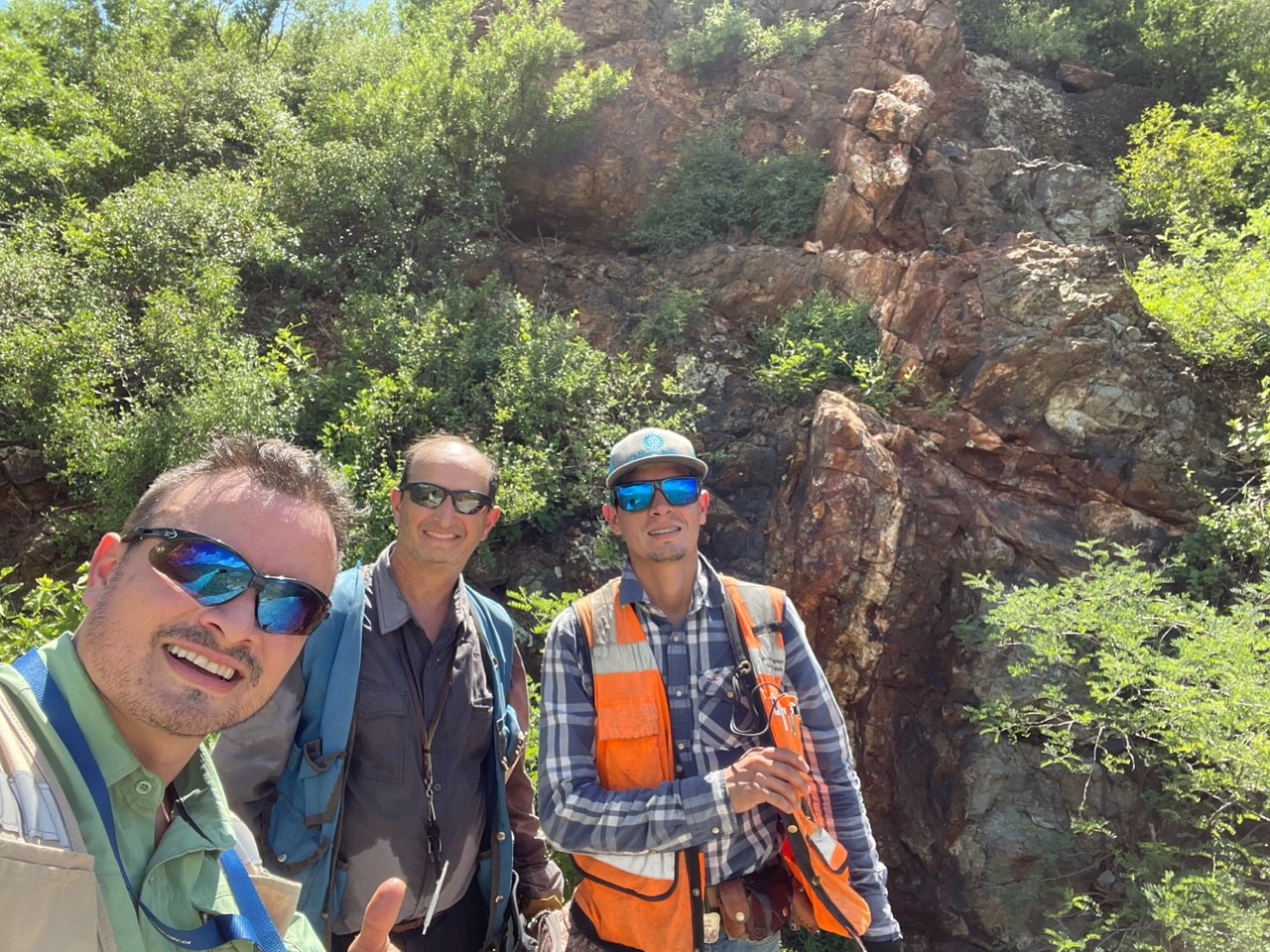